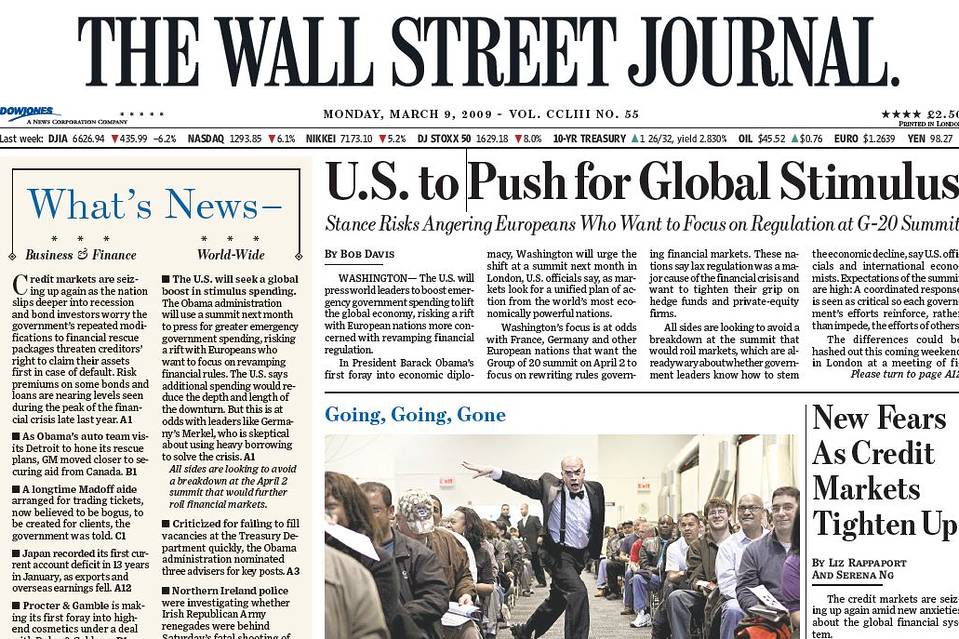 Can you recall what you were doing 10 years ago today? I can’t, but I do know the period October 2008 through May 2009 was the most difficult of my professional career. Against the backdrop of the Great Financial Crisis every day was a slog, trying to help clients maintain investment discipline in the midst of a market maelstrom.

Tomorrow, March 9th, marks the 10th anniversary of what proved to be the market bottom. As the Wall Street Journal headline from that day shows, there was no “expert” calling for investors to buy. As someone smarter than me likes to say, they don’t ring a bell at the bottom. It was, and forever will be, impossible to call market tops or bottoms. For investors who exited equities sometime between the onset of the crisis in September 2008 and today, they faced the most difficult of decisions – how / when to get back in. And some investors are no doubt still waiting…after the S&P 500 is up over 300% in the intervening period.

It is a lesson on endurance and fortitude – a prerequisite for the long-term equity investor. After 2009 more challenges loomed. In 2010, fears rippled through markets of a Greek debt default. In 2011, US government debt came close to default during a budget showdown. In 2012, the European Union appeared close to coming apart. In 2014, the Syrian civil war and Ebola were big news. In January 2015, Chinese markets led to a global sell off.

The lesson is that there will always be excuses to exit the market.  And for anyone with a sense of history, they will always be wrong. Market declines of 10-20% are routine (they occur on average once every 3-4 years) but it is hard to argue against the long-term wisdom of being a partial owner in the 500 largest US companies, which anyone invested in the S&P 500 surely is.

The four most dangerous words in investing are “this time is different.”