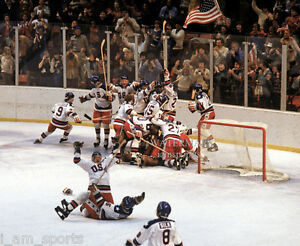 Saturday marks the 40th anniversary of the famous “Miracle on Ice” – the 1980 US Olympic hockey team’s 4-3 win over the Soviet Union. I was in high school and can remember the game was televised on tape delay (this was long before the internet). We had snow in Raleigh during the 1980 Olympics and I remember playing broom hockey with friends in the street using laundry baskets for goals.

On February 9, 1980 the US team played the Soviets in Madison Square Garden, their last exhibition before the Olympics. The US team lost 10-3.

For me, the most interesting part of the 1980 hockey team, is the little-known back stories. In 1960 the US hockey team won the gold medal in Squaw Valley. The last player cut from the 1960 squad was Herb Brooks, a college player from the University of Minnesota. That same Herb Brooks went on to become the coach of the 1980 Olympic hockey team.

The movie Miracle has a brief scene where Brooks has to make his final roster cut before the Olympics begin. Ralph Cox turned out to be the last player cut from the 20-man Olympic roster. An injury had hampered his effectiveness and Brooks, having been in the very position Cox was twenty years earlier was especially sensitive about it.

Cox handled the situation with amazing grace (see interview here). “Right from the get-go I felt an obligation to all the guys to live life with my chin up and always be proud of their accomplishments, which I was. It took about ten years to truly realize I would do it all over again if given the chance. Don’t get me wrong, I would have loved to be an Olympian. But I’ve had such a remarkable life, I couldn’t imagine it being any better.”

In a Sports Illustrated article on the 10th anniversary of the 1980 win Herb Brooks was asked what he thought about in the waning seconds of the victory over the Soviets. He said, “I thought of Ralph Cox.”