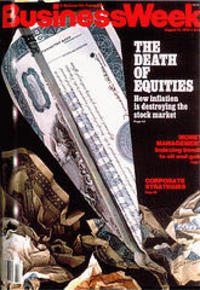 Forty years ago today Newsweek magazine (now defunct) lamented the difficult circumstances facing stock investors with a cover titled, The Death of Equities. Less than a week before President Jimmy Carter had appointed a relatively obscure banker named Paul Volcker as Chairman of the Federal Reserve. From 1976 through 1980 inflation averaged 8.4%, and the inverted yield curve had US Treasury yields of 9.8% on a one-year Treasury and 9% on the 30-year bond. Thirty-year mortgage rates were around 9.7% (and within two years would nearly double to 17%).

In short there was very little to feel good about as an investor in stocks. Dividend yields on the S&P 500 were well below the rate of inflation, 1977 and 1978 had produced losses of 13% and 2% respectively in the S&P 500.

But as is so often the case, such difficult circumstances proved to be an opportune time to buy equities. Over the decade of the 1980’s the S&P 500 experienced an annualized return of 10.4%, with only one down year.

Stock investors have enjoyed an unusually extended tailwind over the last decade. It is important to remember that market conditions will not always be so sanguine.